April 25, 2012
Our Amazing Two-day Visit to St. Petersburg, Russia (the morning of day one)

When I was young, I imagined myself visiting the world’s most exotic and remote sights. My parents had traveled to many amazing places, and I so envied them and wanted to see them for myself. But I never considered St. Petersburg, that glorious city of Peter the Great and Catherine the Great, because it was behind the iron curtain and off limits to decadent western capitalists like me. But all that changed in 1989 with the collapse of the communist regime, and with Russia’s awkward attempts to expose itself to some of that capitalistic action.

It took them a while, but places like St. Petersburg are now open to tourism, and it’s one of the reasons we were so excited about going on this cruise. And despite arriving during a bout of dreary weather, we weren’t disappointed.

St. Petersburg is located at the far eastern tip of the Gulf of Finland which, itself, juts out the eastern end of the Baltic Sea. So it was only an overnight sail from Tallinn, Estonia where we had visited the day before.

St. Petersburg is one of Russia’s western-most ports, and the closest with direct access to the Atlantic (via the Baltic Sea.) This gives the city great strategic advantage and no doubt contributed to its power and influence over the rest of the nation.

St. Petersburg is at the end of the Gulf of Finland, a day's sail from Tallinn, Estonia (courtesy Google Maps)

I must admit that what greeted us the morning of our arrival was less than thrilling. Not just because that first day was overcast and drizzly, but because the cruise terminal was situated on a flat, empty tongue of reclaimed land and blocked in by a wall of high-rise apartments. Nothing of the great city was visible to us from the ship. 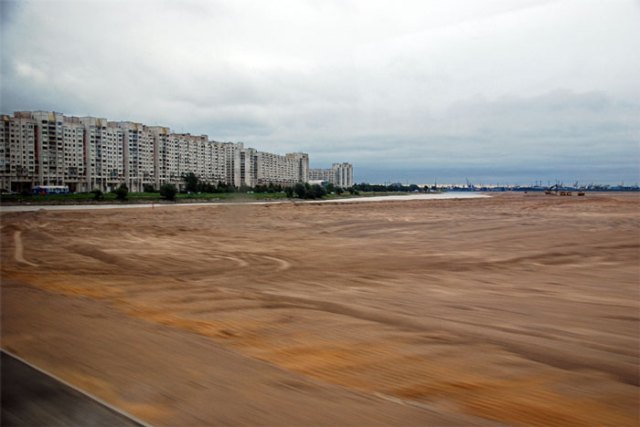 One of the more unusual conditions for being granted entry to St. Petersburg, or more precisely to Russia, was that we needed our passports. For most foreign ports-of-call, our cruise boarding/cabin card and one piece of photo-ID were usually sufficient. Russia was clearly not as trusting.

We were forewarned of these more serious security measures during our pre-departure wait in the Queen’s Show Lounge while still onboard the ship. They repeatedly advised us to follow the rules and not to deviate (breaking the rules seems to be something that some travellers feel compelled to do as a point of principle.) But they warned us that such behaviour wouldn’t be tolerated in Russia. I gotta admit, the officiousness of the customs process had me a little on edge. But it turned out to be a quick, efficient and painless – if not cheerful – procedure. No one we heard about had any trouble getting through.

In most countries we pass through customs together as a family, but not in Russia - one-by-one please 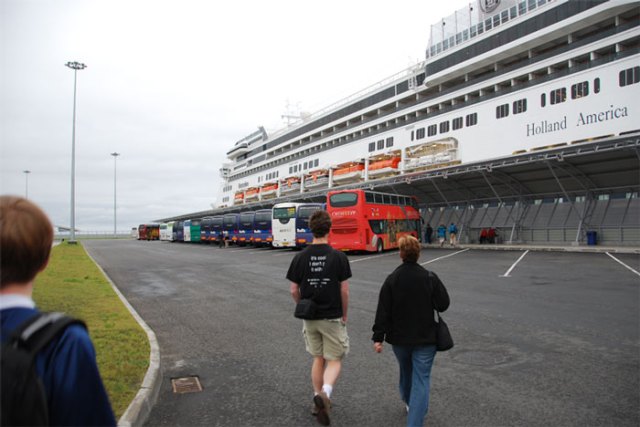 Clearing passport control was no problem, and we were soon free to board our waiting tour bus

Like any big city, St. Petersburg has its good sections and its run-down sections. Since we were moored on an extension of the old dockyards, the areas we first drove through were somewhat drab and, in many places, in dire need of repair. The grey skies didn’t help. Our delightful Russian tour guide Vera told us not to feel so bad, as St. Petersburg only gets about 30 days of sunshine per year. She also dismissed the urban decay we were seeing as a “work-in-progress”, assuring us that new community initiatives were clearing away these old housing units and replacing them with clean, large, efficient ones. What is it with the Russians and huge high-rise apartment complexes?

As ubiquitous as the poor part of town looked, we were frequently reminded that we were in Russia 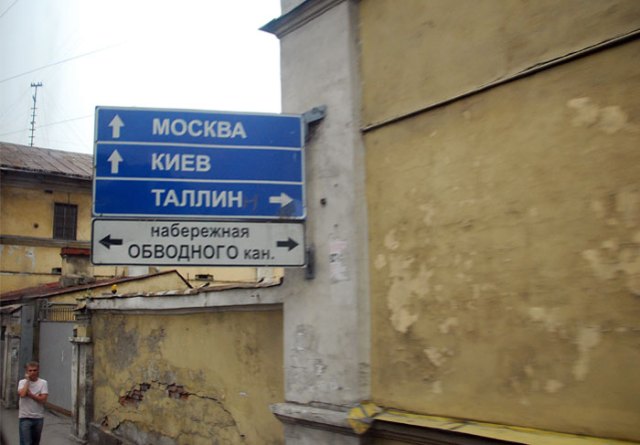 The top sign points to Moscow, the bottom probably to Tallinn, but KNEB?? - wait, I'll ask that guy

Despite my poor initial impression of St. Petersburg, the city more than made up for it later in the day. Pretty soon we were heading out of town toward the south shore of the Gulf of Finland. While not exactly exciting, we got to see St. Petersburg in morning mode with commuters, buses, and trolleys busily going about their daily activities.

I know... me and canals... I just can't resist taking pictures of them, even from a moving bus

See what I mean? Show me a canal and my camera just naturally goes into action

I know these aren't your typical National Geographic shots but, hey, this too is St. Petersburg 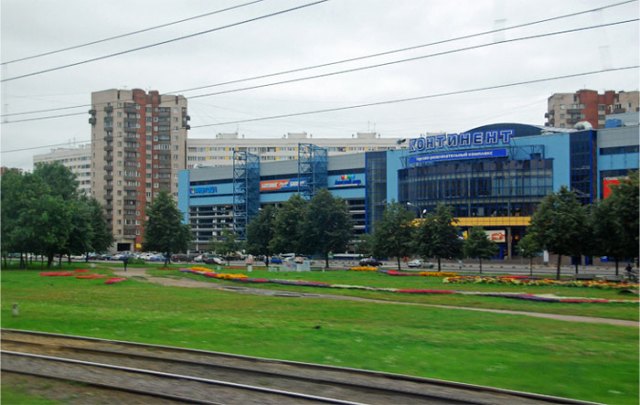 A Russian shopping mall - but then I didn't need to tell you that, did I?

Uh... I'm not really sure, but I think it's either the Mother Ship, or Mr. Peanut's Russian headquarters

We were soon out of the city and into the suburbs where the relatively well-off live. You could see this by the fact that the homes (the Russian equivalent of small estates) were more elaborate, and built on larger parcels of land. 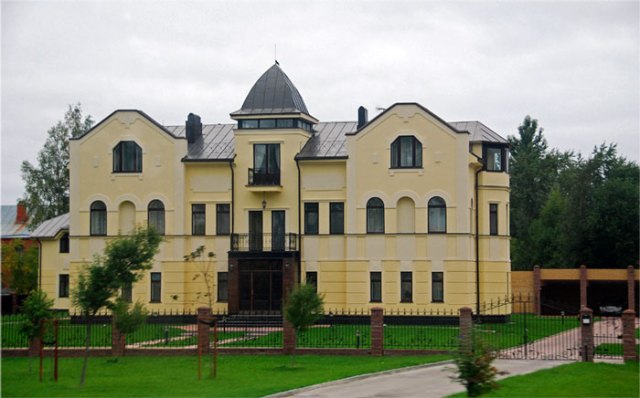 This, we were assured, was a Russian house - and probably home to two or even three generations

This is a hotel in a small town outside St. Petersburg - Russians clearly like their ornate architecture

After an hour of driving we arrived at our destination, Peterhof, the beautifully preserved summer estate of Peter Romanov, also known as Peter the Great, beloved Tsar of Russia back in 1700. These photos don’t do it justice, as something this grand and expansive doesn’t show its best side to consumer cameras on cloudy days.

There were lush gardens, ornate fountains, manicured shrubs and groves of trees in every direction 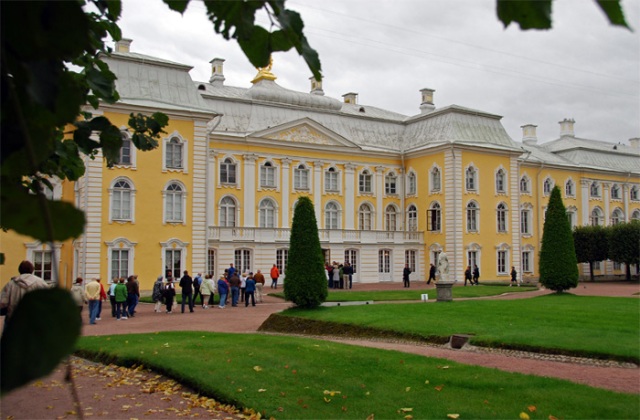 The closer we got, the more impressive it became - everyone on our tour was simply in awe

Built between 1714 and 1725, and completed shortly before Peter’s death, Peterhof was practically destroyed during the people’s Bolshevik revolution in 1917 when it was gutted of most of its valuable works of art, and again by German attacks during WWII. It has taken a great deal of state and raised money to restore it to its previous glory. As a result, the new proprietors are eager to keep it in pristine shape. So we had to don cloth slippers over our shoes, leave our cameras and backpacks behind (in safe storage), and even walk quickly through some rooms so as not to damage their delicate Chinese silk tapestries with carbon dioxide from our breath – seriously. The point is, I have no photos of my own to show you of the inside. Therefore, I have turned to Creative Commons to supply a few interior shots just so you’ll have an idea of why Peterhof is such a magnificent treasure. 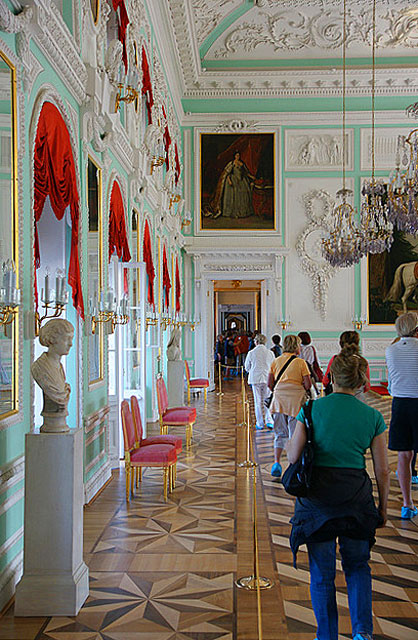 The parquet floors, the draperies, the ceilings - all simply breathtaking 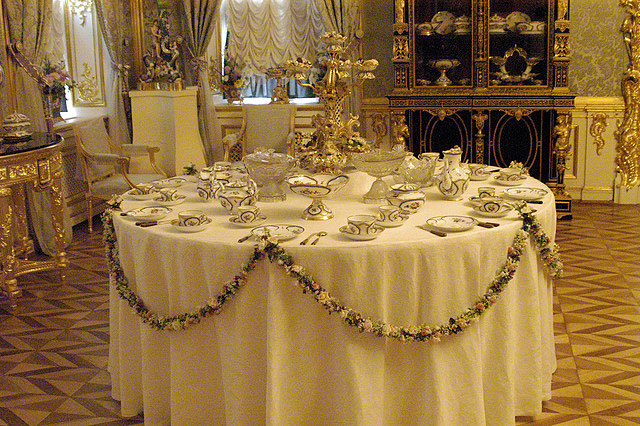 I could continue using other people’s photos, but that wouldn’t be right. So back to our own shots. After a couple of hours of walking and gawking at this stunning residence, our backpacks and jackets were returned to us and we were directed outside to the rear lawn. Some backyard! 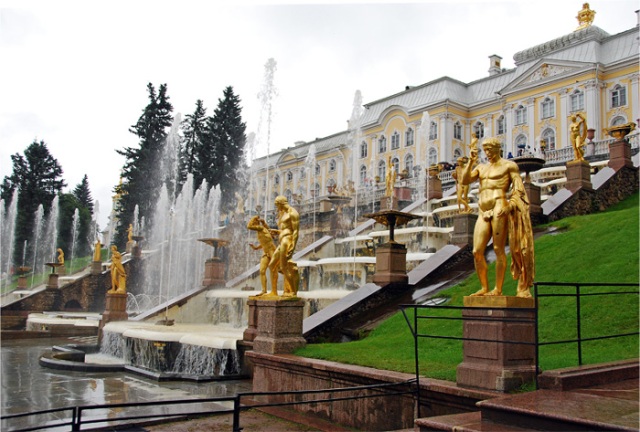 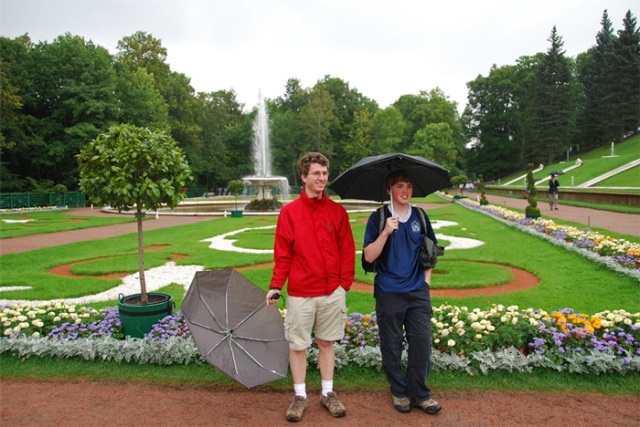 Our sons, Robert and Jeffrey risk getting wet as they pose for a photo in the Lower Park

I guess when you're trying to stay dry, you don't really care how ridiculous you might look

We were given 30 minutes to wander around the Lower Park before we were once again rounded up and directed to a luncheon arranged for us and served in the Garden House. 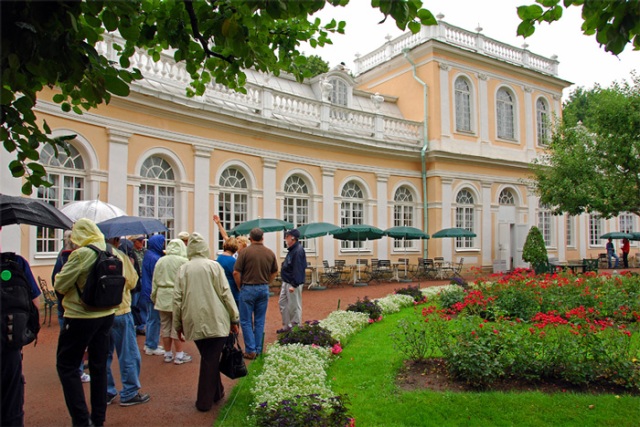 The meal was modest but filling, the decor elegant, and the company priceless

Following our posh lunch, we were led through lush gardens along the canal to the next part of our tour

That completes the morning of our first day in St. Petersburg. I am going to stop here, as there is so much more to show from this first day, and I’ve already run out of room. Beautiful Peterhof was only the beginning of our Russian adventure, which I’ll continue in my next posting.