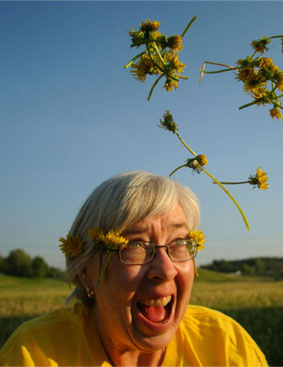 Often, those with vision see what’s in it for themselves. In the case of Susan Koswan, I truly believe she sees what’s in it for all of us. Susan is an intrepid campaigner for cleaner, healthier communities in Ontario and Canada. She believes in a natural world where balance and co-existence replace the open warfare between society and the environment. And she does it with a smile, a song, and a twinkle in her eye.

Susan describes herself as a writer (she’s a local columnist), and a singer/guitarist, biking enthusiast, author, and environmentalist. And she is all of these things… a true renaissance woman. She is also quite famous around Kitchener/Waterloo as that dandelion lady, organizer of the local Dandelion Festival that promotes all things dandelion, from dandelion-based foods like cookies, salads and even gelato, to dandelion teas, wine and crafts. Because, to learn to love the dandelion will be to cease waging war against it every summer, which in turn will result in fewer harmful chemicals in our soil and air.

To further that goal, for years Susan actively campaigned for a ban on cosmetic pesticide use on lawns, vegetable and ornamental gardens, patios, driveways, parks and school yards. As a result of these efforts by her and other like-minded campaigners, Kitchener recently imposed this law in its community. Susan knows how to get things done. In keeping with her environmental conscience, Susan has also authored a science fiction novel entitled 2080: The Return of Pareto (featured below).

My affiliation with Susan goes back to 2002 when I first met her at Jack & Lori Cole’s home, at one of their monthly folksong-fests known as the Old Chestnuts Song Circle. That night Susan sang a Tom Petty song, and another delightfully humourous song about dandelions that had us all singing and laughing along. She even brought along some dandelion ice cream for us all to sample… which, I must say, was delicious. To this day, Susan continues to attend our sing-thing bringing with her songs from the most unexpected places and about the most unusual subjects.

More than forty years after the unexpected exit of Jebb, her childhood neighbour and beloved gardening mentor, Carmen is working as a plant breeder in FoodCorps’ BioDome. It’s two decades since the mass extinction of genetically-engineered foodcrops and an equally massive technology meltdown. Although Earth seems to be recovering, there are secret forces at work – one to restore Earth’s ecosystems, another equally determined to destroy them, and a third originating from the depths of outer space.

The long weekend in May 2080 will be like no other, as Carmen and her family and friends find themselves drawn into this Earth-shaking ideological battle.